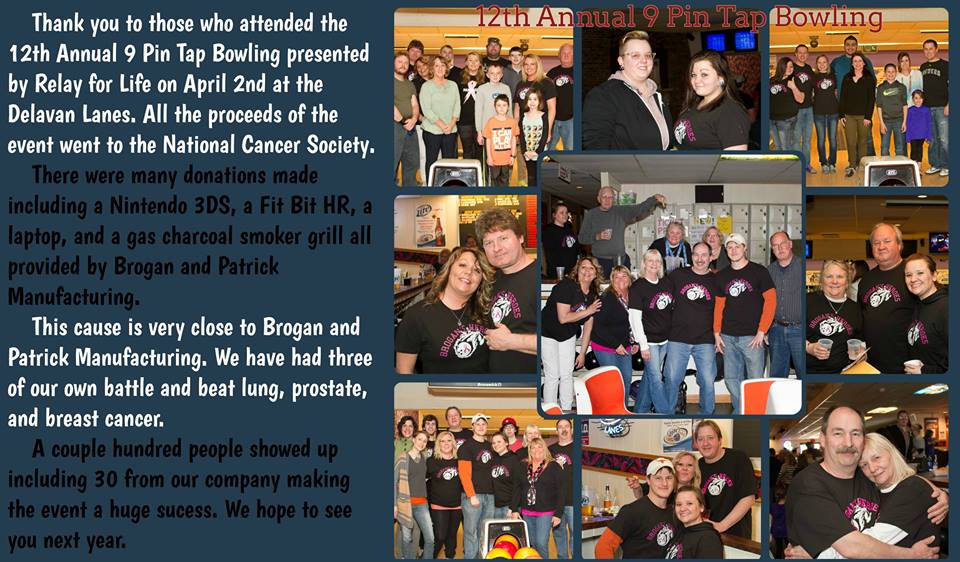 Brogan-Patrick Manufacturing Corp. has always provided its employees opportunities to have enjoyable outings, as well as support causes. Recently, the leading plastics manufacturer was able to achieve both at the 12th annual 9 Pin Tap Bowling Tournament.

The event took place on April 2nd, 2016, and was held at the famous Delavan Bowling Lanes in Delavan, WI. The event was organized by Relay for Life, a charitable company that organizes events to spread awareness about cancer, and to honor survivors of the disease.

Along with the tournament, the event also comprised 50/50 and prize raffles. All the prizes of the raffle were provided by the local community. The aim of the prize raffle was to help collect charitable proceeds for the National Cancer Society. Brogan Patrick Mfg. was among the participants and donators at the event, and used it as an opportunity to interact with community members.

Flush Strikes All the Way!

The bowling tournament has been a favorite event of Brogan-Patrick for over 14 years. The organization began attending the tournament ever since it was first began in Elkhorn, WI. The Brogan-Patrick team continued to attend the event even after it was moved to the city of Delavan. Since then, the team has never missed an opportunity to participate in the tournament.

This year, an estimated 100 prizes were donated by guests and participants. To ensure that they could make a worthwhile contribution, the Brogan-Patrick team donated a variety of items. These comprised a Nintendo 3DS, a Fit Bit HR, a laptop, and a gas charcoal smoker grill. These donations went into the prize raffle.

Thirty employees from Brogan-Patrick participated in the bowling tournament. The public event was successful, as an estimated 200 people attended the event.

Although Brogan-Patrick has been a regular participant in the tournament, this year’s event was really special for the team. Previously, three employees of Brogan-Patrick had battled lung, breast, and prostate cancer. Despite facing incredible odds, these colleagues were able to make complete recoveries.

The struggles and triumphs of their friends made a strong impression on the Brogan-Patrick team. This inspired them to support cancer research and awareness activities. They were able to get the opportunity to do so at the 9 Pin Tap Bowling Tournament. The entire team at Brogan-Patrick has plans to continue attending the tournament and raffle every year.

It is not every day that a manufacturing organization gets to participate in a well-known tournament, which supports a good cause. By playing in the bowling tournament, the employees of Brogan-Patrick were able to support the goal of all-round cancer awareness, while enjoying one of Wisconsin’s favorite pastimes.